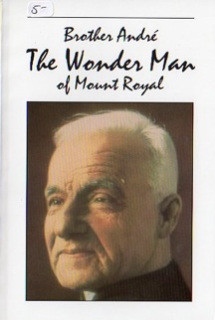 The author of this book was a contemporary of Brother Andre and a close collaborator. He wrote this book a few month after he death of his friend which took place on January 6, 1937. Because of this proximity, the author's words are filled with warmth and admiration for the humble Brother who was known at that time as the wonder man of Mount Royal.

This book tells that story of a young rural worker who became a Religious, and then doorkeeper of Notre Dame College and who spent his entire life spreading the devotion to St. Joseph whom he called "his friend." Thus, in 1904, on the grounds facing that college, he founded St. Joseph's Oratory of Mount Royal. Because he had such a great devotion to St. Joseph, he wanted others to honor him and to pray for his intercession.

Indeed, such an intercession was powerful: pilgrims gave testimonies of physical and spiritual favors obtained through prayer and confidence in this great saint. Until his death at the age of 91, Brother Andre received millions of people who came to confide their sorrows to him, and who, in turn, received comfort, interior peace and cures for their illnesses.