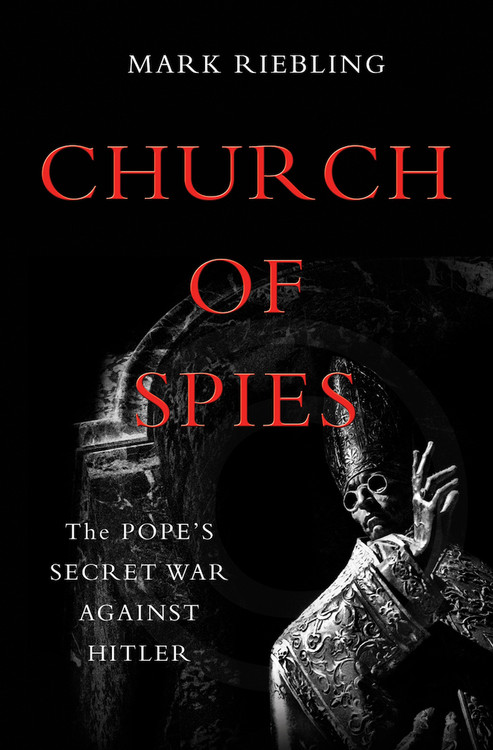 Hailed as "powerful and provocative" (Washington Post), "heart-pounding" (New York Times) and "brilliant" (Kirkus), intelligence expert Mark Riebling's groundbreaking book Wedge inspired "no fewer than seven assorted congressional committees, internal evaluators, and blue-ribbon panels" (Wall Street Journal). Now, in the long-awaited Church of Spies, Riebling documents an epic secret battle in the Second World War -- and reframes one of the great historical controversies of our age.
The Vatican's stance toward Nazism is fiercely debated. History has accused wartime pontiff Pius the Twelfth of complicity in the Holocaust and dubbed him "Hitler's Pope." But a key part of the story has remained untold.


Pius ran the world's largest church, smallest state, and oldest spy service. Saintly but secretive, he skimmed from church charities to pay covert couriers, and surreptitiously tape-recorded his meetings with top Nazis. When he learned of the Holocaust, Pius played his cards close to his chest. He sent birthday cards to Hitler--while plotting to overthrow him.

Church of Spies documents this cross-and-dagger intrigue in shocking detail. Gun-toting Jesuits stole blueprints to Hitler's homes. A Catholic book publisher flew a sports plane over the Alps with secrets filched from the head of Hitler's bodyguard. The keeper of the Vatican crypt ran a spy ring that betrayed German war plans and wounded Hitler in a briefcase bombing.

The plotters made history in ways they hardly expected. They inspired European unification, forged a U.S.-Vatican alliance that spanned the Cold War, and challenged Church teachings on Jews. Yet Pius' secret war muted his public response to Nazi crimes. Fearing that overt protest would impede his covert actions, he never spoke the "fiery words" he wanted.

Told with heart-pounding suspense, based on secret transcripts and unsealed files, Church of Spies throws open the Vatican's doors to reveal some of the most astonishing events in the history of the papacy.