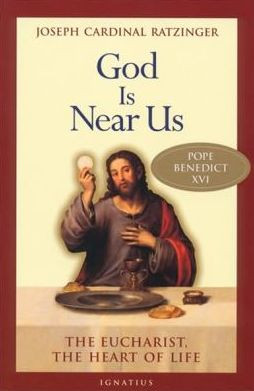 God Is Near Us: The Eucharist, the Heart of Life - Joseph Cardinal Ratzinger

The Holy Eucharist holds a special place in the teaching of Pope Benedict XVI. This book, a series of homilies, pastoral letters, and lecture by then-Cardinal Joseph Ratzinger, mostly written or delivered during his time as Archbishop of Munich and Friesing, German, focuses on the celebration of the Eucharist as the source and summit of the Catholic life. In these previously unpublished texts, Cardinal Ratzinger compellingly shows us the biblical, historical and theological dimensions of the Eucharist.