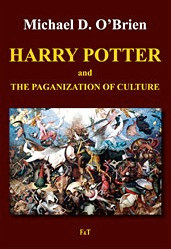 Harry Potter and the Paganization of Children's Culture

Master storyteller, best-selling novelist and artist Michael O'Brien - the man to whom CNN went for comment on Harry Potter - has penned the definitive work assessing the Potter phenomenon. This book is essential reading for all parents whose children have read or are considering reading the wildly popular offerings by J.K.Rowling and similar works such as Stephenie Meyer's Twilight series. Although this is an analytical work, the reader will be captivated from the beginning, from the must-read preface onward.

In Harry Potter and the Paganization of Culture, he contrasts Potter-world with C.S. Lewis's Narnia and with Tolkien's The Lord of the Rings, and specifically Harry with Frodo. For those whose children have read Potter, O'Brien's analysis will enable parents to comprehend the messages which have been fed their children and give them the points and arguments which will hopefully be the antidote to properly reset their moral order.

The book goes beyond Potter to address other bestselling series such as Twilight and Phillip Pullman's The Golden Compass. In addition to these and other fantasy books, O'Brien reviews the films which they spawned. In all, O'Brien's new book teaches Christians how to discern harmless fantasy literature and film from that which is destructive to heart, mind and soul.