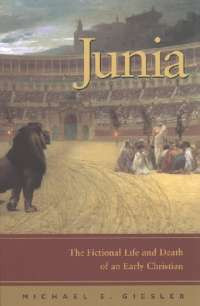 The Fictional Life and Death of an Early Christian

As the beautiful daughter of a Roman senator, Junia enjoyed the best that life had to offer in first century Rome. She was grateful and anxious to please her family, a dutiful and obedient young woman of privilege. That is, until a chance friendship and its abrupt end sparks an interest in a new religion that will lead to a destiny she never imagined. Junia is a fictional exploration of life at the very beginning of Christianity from a very personal point of view. It shows how the attractions of the new religion were accompanied by social struggle, family division, and the risk of a disgraceful death to those courageous enough to embrace it. The author is a priest of the Prelature of Opus Dei in St. Louis