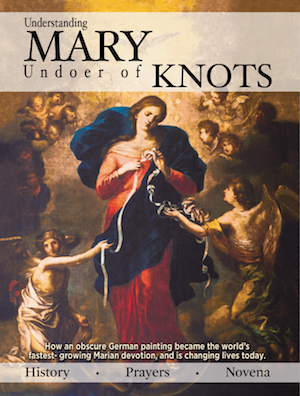 This small booklet contains the history and novena to Mary, Undoer of Knots--a favorite devotion of Pope Francis.

To show us the mission granted to the Virgin Mary by Her Son, a German artist painted Mary Undoer of Knots with great grace. Since 1700, his painting has been venerated in the Church of St. Peter in Perlack, Germany. It was originally inspired by a meditation of Saint Irenaeus based on the parallel made by Saint Paul between Adam and Christ. Saint Irenaeus, in turn, made a comparison between Eve and Mary, saying: "Eve, by her disobedience, tied the knot of disgrace for the human race; whereas Mary, by her obedience, undid it".

But what are these knots?

They are the problems and struggles we face for which seem hopeless. Knots of discord in your family, misunderstandings between parents and children, disrespect, violence, the absence of peace and joy at home. They are also the knots of anguish and despair of separated couples, the dissolution of the family, of a loved one struggling with addiction, or one sick or separated from home or God, as well those inflicted by abortion, depression, unemployment, fear, and solitude.