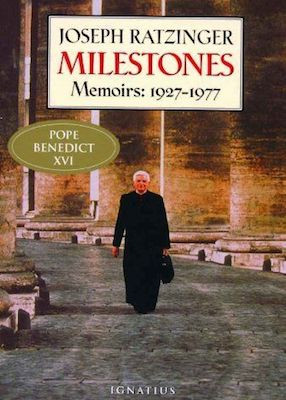 Rich in humor and culture, as well as passion and love for the cause of God and of man, Milestones is the early autobiography of Pope Benedict XVI, Joseph Ratzinger. It tells the fascinating and inspiring story of his early family life, the years under Nazi oppression in Germany, and his part in World War II.

This book also recounts Joseph Ratzinger’s calling and ordination to the priesthood, the intellectual and spiritual formation he received, his early days as a parish priest, his role as an expert at the Second Vatican Council, his experience as a popular university professor and theologian, and his appointment as Archbishop of Munich-Freising in Germany. Joseph Ratzinger would go on to serve for over two decades as the Prefect of the Congregation of the Doctrine of the Faith under John Paul II, before being elected pope himself in 2005.

Written before Benedict XVI became pope, Milestones remains a valuable road map to the man’s mind and heart. It dispels the media myths and legends, and it reveals the real Benedict XVI—a man of the Church who loves God and humanity, a scholar, a theologian, a teacher, and a humble pastor with deep compassion and profound spiritual insight.