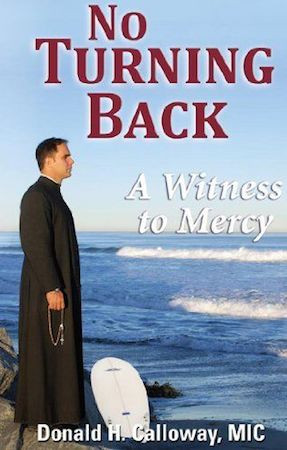 Many who know of Fr. Donald know him because of his conversion story. He has spoken of it at conferences, on television, radio, online, and wherever he can spread the message. This book finally captures in print how Divine Mercy, through the intercession of the Blessed Mother, touched his life.

In his own words, No Turning Back recounts Fr. Donald's personal story of conversion after reading a book about Our Lady. Though today he is a devout Catholic Marian priest, Fr. Donald's early years were no indication of what was to come. Before his conversion to Catholicism, he was a high school dropout who had been kicked out of a foreign country, institutionalized twice and thrown in jail multiple times. Discovering a book on Our Lady led to his conversion and ardent love of Mary and the Church.