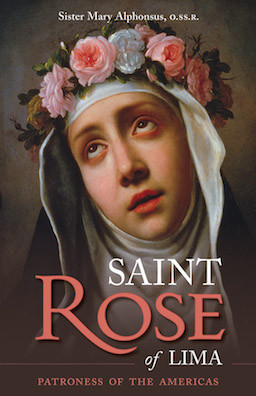 This biography of St. Rose of Lima: Patroness of the Americas relates the tale of a humble, young, poor girl who gave her life to God.

St. Rose of Lima (1586-1617), Patroness of the Americas, is the first canonized saint of the New World. Though exquisitely beautiful, she refused to marry, and while helping support her family by needlework and growing flowers, she practiced heroic charity and lived as a Dominican Tertiary in her parents’ home.

Rose tenderly cared for the sick and often obtained miraculous cures for them. On other occasions, she worked miracles in order to feed the members of her family, and became known as “Mother of the Poor.” Rose prayed and offered her sufferings continually for the conversion of the pagan Incas, and once through her prayers, the Blessed Sacrament and the people of Lima were spared from a savage pirate attack.

Although she only lived to the age of 31, St. Rose’s love of God was so intense that she was recognized as a saint in her own time and was canonized by the Church just 54 years after her death. St. Rose of Lima has captured the imagination of the world and stands as one of the most popular saints in the history of the Church.