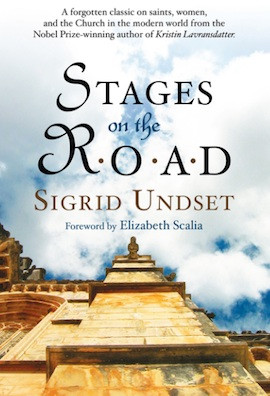 Stages on the Road - Sigrid Undset

Sigrid Undset is among the great modern writers of the twentieth century and was an adult convert to Catholicism. This forgotten treasure from the Nobel Prize–winning author of Kristin Lavransdatter is a fascinating collection of saints’ lives, a prophetic critique of modernity, and a surprisingly contemporary take on being Catholic—in particular a Catholic woman—in a sometimes hostile secular world.

Stages on the Road is a series of essays about the relationship between the Church and the modern world. In the spirit of G. K. Chesterton and C. S. Lewis, Undset points to inconsistencies, hypocrisies, and blind spots of the modern secular mindset by introducing readers to the stories of somewhat-forgotten Catholic figures like St. Angela Merici and the English martyrs Margaret Clitherow and Robert Southwell—people who stood fast to their faith in the face of both intellectual and political hostility. Undset tackles such topics as religious freedom, Christian/Muslim relations, and the vocation of women.