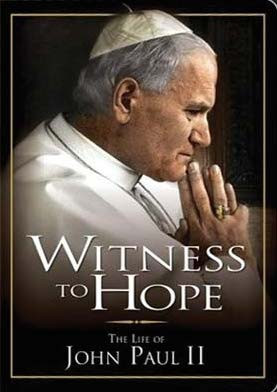 Witness to Hope: The Life of John Paul II (DVD)

Shaped by the terrors of Nazi-occupied Poland and the subsequent brutalities of the Communist regime, John Paul II became one of the world's greatest proponents of religious freedom and human rights. With rare historical stills and archival footage, along with new location footage taken in Rome and Poland, this richly textured film based on the book Witness to Hope by George Weigel traces the personal life and struggles of the first non-Itlaian pope in over 450 years. Witness to Hope is a complete and intimate portrait of the most beloved pope of the 20th century.

115 minutes and formatted for region 1 viewing (USA and Canada)