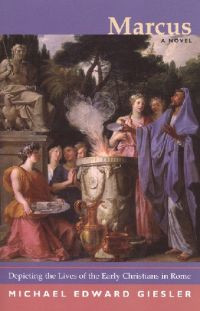 In second-century Rome, Marcus tries to resume his life as a student of philosophy at the Athenaeum. His sister, Junia, had been executed in the Amphitheater for the crime of becoming a Christian. A few weeks after her death, Marcus himself is saved from being run over by a reckless charioteer. A young passerby, a Samarian, instinctively throws him out of the path of danger. And through this selfless act of a stranger, Marcus is led to share a new world based on truth and love, but a world beset with new dangers.

Continuing the story of Junia and of early Christian experience in the Roman Empire, Marcus reveals how the followers of Jesus, the Christ, began to transform pagan society. Social and family connections intertwine with friendship and betrayal, prejudice and loyalty, as those who are drawn to the Way must make decisions that define their own lives and forever change the world in which they live.

This book is perfect for teenagers as well as adults!