Our CD equipment will be up and running this weekend, and we will be able to catch up and fill any backorders in the coming week. Thank you for your patience! God bless. 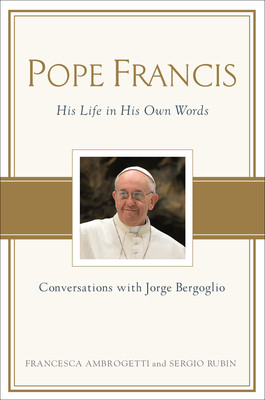 Pope Francis Conversations with Jorge Bergoglio: His Life in His Own Words - By Francesca Ambrogetti and Sergio Rubin

by Francesca Ambrogetti and Sergio Rubin

An intimate and personal glimpse inside the mind of the leader of the Catholic Church, Pope Francis, through his own words…

“I believe in the kindness of others, and that I must love them without fear.”—Jorge Bergoglio, Pope Francis

Jorge Bergoglio is the first Latin American pope, the first Jesuit pope, and the first to take the name Francis, after Saint Francis of Assisi, the thirteenth-century friar known for his charity and kindness. Here, in a series of extensive interviews conducted over two years, he reveals the very image of a humble priest and inspired teacher.

This is a portrait of a man more interested in substance than style. In spontaneous, intimate terms, he talks about his childhood and family life, his first job, the discovery of his calling, and his early days in the seminary. He was a teacher of psychology and literature who befriended writers such as Jorge Luis Borges. He cites Homer and Cervantes with ease, and names Babette’s Feast as a favorite film and Marc Chagall as a favorite painter. He also takes on uncomfortable subjects: the declining number of priests and nuns; celibacy; the scandals that have rocked the Church; and his experience with the military dictatorship of Argentina.

Through his own words, this book reveals a man who is thoughtful and witty, learned and introspective—one whose actions and words reflect his deeply rooted humility. Also included in this volume are Pope Francis’s own writings and reflections—full of wisdom and inspiration.