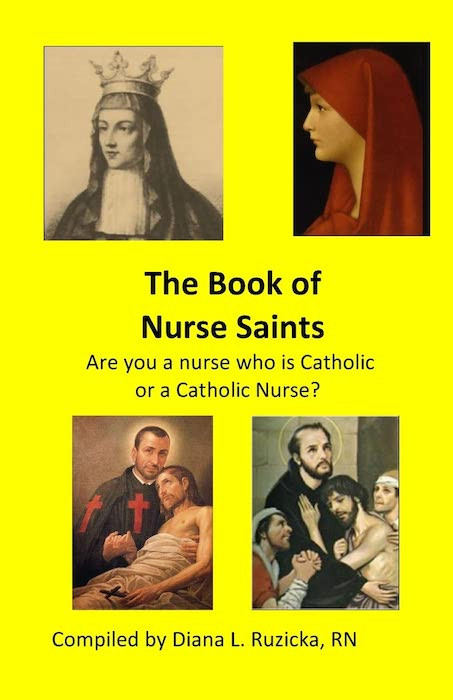 “In the twilight of our life, God will not judge us on our earthly possessions and human success, but rather, on how much we have loved” said St. John of God. Along with St. John of God and St. Camillus de Lellis, the two nurses declared patrons of nurses and nurses association by His Holiness Pope Pius XI, this text provides description of the lives of several nurses who have formally been declared saints or on the path to canonization: twenty-eight saints, fifty blesseds, fourteen venerables, three servants of God and seven martyrs not otherwise categorized.

An excerpt from the Code of Canon law describes the Church law regarding veneration of saints and care of relics. Lastly included are excerpts from His Holiness Pope Pius XI’s papal address to the International Catholic Committee of Nurses and Medico-Social Assistants (CICIAMS) II and III World Congresses and Pope Pius XII address to Midwives in 1952 and Nursing Staff of Roman Institutions in 1952. Though nursing care was provided by many of the unnamed martyrs who died during the great pestilence in Alexandria Egypt between 249 A.D. and 262 A.D. the first named nurse saint was St. Fabiola who established the first hospital in Rome. Queen St. Radegund, who was also the patron saint of the first council of Catholic nurses established in the United States of America in 1909 in Boston; King St. Elzear and Queen Bl. Delphina provided nursing care. St. Catherine of Siena is a Doctor of the Church and was a mystic and stigmatic. Bl. Hanna Chrzanowska, RN of Poland is the first lay Catholic Registered Nurse to be beatified.

Many nurses were physically martyred in the 20th century in Eastern Europe by the atheist, communist Soviets, and in Algeria, Liberia and Somalia by Muslim extremists. There were also many martyrs of charity who died caring for individuals infected with contagious diseases (e.g. novel influenza, hemorrhagic fever, bubonic plague etc.). They provided nursing care without concern for their own welfare caring for each patients as they would the person of Jesus Christ. As St. Giuseppina, Vannini and many of these founders and foundresses instructed their members, Always see in the sick the image of the suffering Jesus.